Vikas heaters use fin tubular elements within its design to help reduce the watt density. It also allows for more consistent air flow streams within the duct and increases the life longevity of the elements.

Despite their advantages, finned tubular heaters are not recommended for applications where outlet air temperatures exceed 600°F. 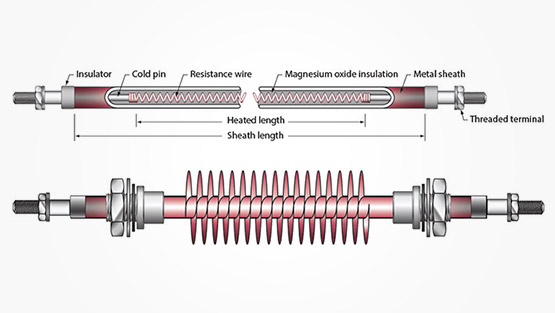 The physical characteristics of a finned tubular heater play a major role in the effectiveness of its heat transfer.

Fin material is continuously spiral wound tightly onto the element surface to increase the convective surface area for air and non-corrosive gas heating. Fin spacing and size have been tested and selected to optimize performance. Steel finned units are then furnace brazed, bonding the fins to the sheath to increase conductive efficiency. This allows higher wattage levels to be achieved in the same flow area and produces lower sheath temperatures prolonging heater life. For higher temperature or more corrosive applications, stainless steel fins securely wound on alloy sheath are available.

Application conditions such as vibration and toxic/flammable media should be taken into consideration when installing heaters.

The sheath material of a finned tubular heater and its watt density are two critical factors that affect its durability.